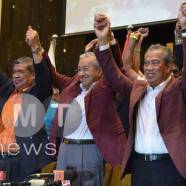 Dr Mahathir is expected to seek an audience with the Agong, to be sworn in as Malaysia’s seventh prime minister.

PETALING JAYA: Pakatan Harapan, the four-party alliance headed by Dr Mahathir Mohamad, achieved their impossible dream tonight with their campaign to “Save Malaysia”, scoring a historic general election victory that will result in the first change of power at the federal government.

The coalition demolished the Umno-led coalition’s uninterrupted grip on power since independence, and returned 92-year-old Mahathir Mohamad to the helm, 15 years after he stepped down.

Pakatan has secured 112 seats, giving it a simple majority in the 222-member Dewan Rakyat. These include the five seats won by Warisan, its ally in Sabah.

Mahathir is expected to seek an audience with the Yang di-Pertuan Agong in the morning and to be sworn in as Malaysia’s seventh prime minister.

“At this moment, we don’t have a prime minister,” Mahathir told a packed press conference with other top PH leaders at a hotel here.

Attention will now focus on PKR de facto leader Anwar Ibrahim, who is due to be released from prison next month.

Mahathir has said he would be prime minister for “about two years” to fix Malaysia’s problems but would hand over power to Anwar once Anwar received a royal pardon for his conviction on a sodomy offence. The conviction bars him from holding office for five years.

Tonight’s result leaves Barisan Nasional (BN) in tatters, and Najib’s future in doubt, as well as BN’s backbone Umno and its partners.

BN retained Pahang and Perlis. In Perak, BN won 27 state seats, PH 29, while PAS won 3. BN now needs to convince PAS to form an alliance to remain in power in the state.

There is no change of guards in Sarawak, which held its state elections separately in 2016.

PAS, which has stayed out of the PH coalition, retained Kelantan, and captured Terengganu which it lost in 2004.

Mahathir and the opposition alliance rode a wave of popular discontent against BN and Najib, bringing about a “Malay tsunami” of rural votes that unseated the ruling coalition after a bitterly-fought three-year campaign.

1MDB had been the cudgel of choice for the opposition after disclosures of its massive losses, amounting to as much as RM42 billion, a RM2.6 billion deposit in Najib’s personal account, and a US Justice Department suit to recover US$1 billion in assets said to have been bought with funds linked to 1MDB.

Najib had been confident that rural Malay voters, the backbone of Umno’s support, would not desert him and BN. As recently as April, he had said: “I can assure you there will be no Malay tsunami against the government.”

He said the opposition strategy would only be detrimental to the Chinese community, who had largely voted for DAP.

Najib had said that Mahathir would fail as he sought power again because he had failed to bend Najib to his will.

BN politicians have also accused Mahathir of seeking a return to power to secure the position of his son Mukhriz as a future prime minister. Najib had said that Mahathir had declared “open war” after Mukhriz failed to secure a vice-president’s position in Umno, an accusation that Mahathir had rejected.

Tonight’s Pakatan victory came after a mainly peaceful day of polling, although there were complaints of long queues at many polling centres.