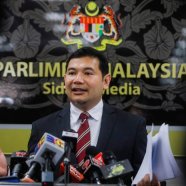 A bankruptcy proceeding has been initiated against PKR vice president Rafizi Ramli over his alleged failure to pay damages and cost related to the National Feedlot Corporation’s (NFC) defamation suit against him. NST’s Syed Umar Ariff reports:

A classified advertisement in Berita Harian states that a bankruptcy notice has been obtained by Datuk Seri Dr Mohamad Salleh Ismail and NFC against Rafizi at the Shah Alam High Court.

The plaintiffs, NFC and its executive chairman Salleh had initiated the proceedings over the unpaid RM306,999.17 in damages and cost. The notice is dated July 13, and effected by an order dated Sept 12.

It also stated Rafizi could object to the proceedings seven days from the receipt of the notice.

When contacted, Salleh confirmed the intention behind the notice and that a bankruptcy proceeding has been initiated against Rafizi, after the Pandan lawmaker had allegedly failed to settle the damages and costs awarded by the court.

“We (Salleh and NFC’s legal party) had contacted him three times over the matter but he has yet to respond until today. So we are going ahead with the bankruptcy proceedings,” Salleh said.

In November last year, Rafizi was ordered by the Kuala Lumpur High Court here to pay Salleh and NFC RM200,000 in damages over a statement in relation to a loan to buy KL Eco City property.

In finding Rafizi’s statements that suggested public funds were used as collateral or security as defamatory, the court awarded RM150,000 to Mohamad Salleh and RM50,000 to NFC.

However in early August, Rafizi had claimed to have collected more than RM1.5 million in public donation, following a drive initiated by him to help pay the damages and cost.

Rafizi was also reportedly said that about RM300,000 from the funds raised would be given to his legal team to comply with the court order.

“But until today, he has yet to settle the damages and costs as instructed by the court,” Salleh said.

Rafizi could not be reached for comment and has yet to respond to queries made over the matter.