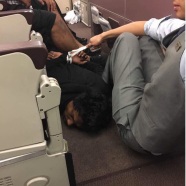 According to a Sydney Morning Herald report, a male voice can be heard saying: “We have a passenger trying to enter the cockpit”.

The Kuala Lumpur-bound flight from Melbourne was diverted back to Melbourne because of a “disruptive passenger” on Wednesday night.

The Australian daily reported that about three minutes later on the recording, the same male voice is heard saying that the passenger claimed to have an explosive device, “tried to enter the cockpit, and has been overpowered by passengers”.

However, the pilot went on to say: “…We’d like to land and have the device checked”.

Fairfax Media Australia journalist Latika M Bourke, who wrote the story, also shared the following on her Twitter account: “I am looking at photos sent to the @smh and @theage from a passenger onboard #MH128. They show armed, masked police on-board.”

MAS flight MH128 took off from Melbourne’s Tullamarine Airport at 11.11pm (local time) and was to arrive Kuala Lumpur at 5.28am (Malaysian time).

The flight turned back about 20 minutes later and landed safely at 11.41pm.

A photograph has also been posted on Twitter by user @LazyAviator, showing a man on the ground restrained by one of the flight crew.

It gives no other details except for the hashtag  #MH128.