Housewife H.K Choo was driving along Jalan Cantonment one afternoon when she encountered a road bully who gestured angrily at her for no apparent reason. 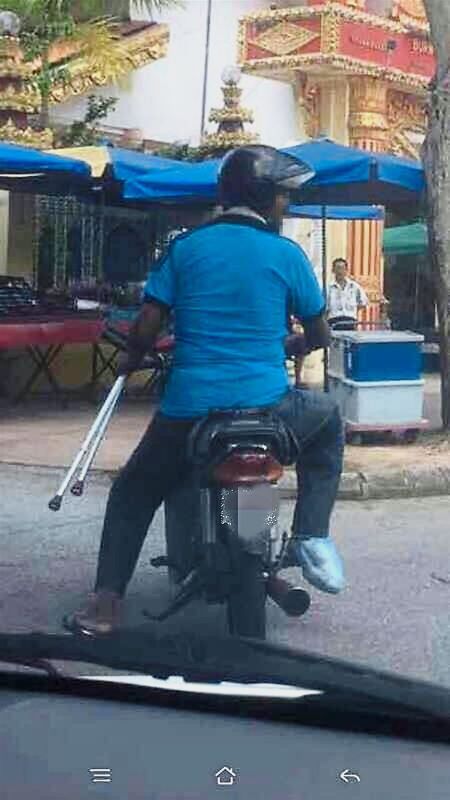 Road rage: The photo of a motorcyclist circulated on social media.

Choo, 41, said the incident happened around 2pm some two weeks ago as she was turning into a supermarket to buy some groceries and the burly man was coming out from Jalan Berjaya.

“The man was carrying crutches on his motorcycle.

“As I was about to find a parking lot, he made a U-turn and came to the driver’s side of my car.

“He then shouted and hit my car’s side mirror. I was numb with shock that I could not react.

“Luckily, my car window was up. This was my first encounter with a road bully,” she said yesterday, adding that she did not lodge a police report.

Choo said she was reminded of her ordeal recently when a friend forwarded her a WhatsApp message to warn the public about a similar person moving around in Pulau Tikus, Gurney Drive and Mount Erskine.

The message says that the man would accuse drivers and motorcyclists of not signalling or cutting into his lane. He would then take away their keys unless they pay him.

A photo of a man wearing a blue T-shirt and carrying crutches on a motorcycle has also gone viral.

George Town OCPD Asst Comm Anuar Omar said police were aware of the matter and that the message was from a community policing group.

ACP Anuar, however, said that there was no police report lodged so far.
Read more at http://www.thestar.com.my/news/nation/2017/05/29/brush-with-road-bully-terrifies-housewife/#Mdv1jHo6bV2qJejL.99