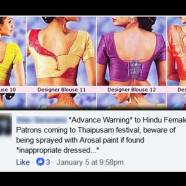 Police today warned the public against behaving in a manner that can threaten the peace during religious ceremonies, singling out a group that has warned they will spray paint on women who dressed inappropriately at next month’s Thaipusam celebration. 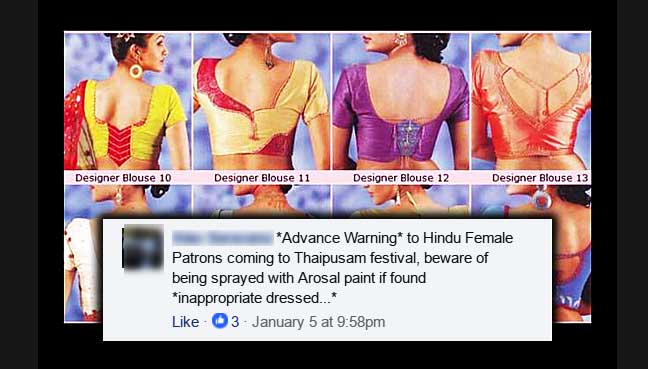 A group of vigilantes behind the Facebook page called the “Thaipusam Spraying Group”, have threatened to use aerosol spray paint on women, including those who wear the saree (Indian traditional dress for women) with their backs exposed.

Accompanying the warning were pictures of saree blouse designs that the group deemed inappropriate.

“Advance Warning to Hindu Female Patrons coming to Thaipusam festival, beware of being sprayed with Aerosal paint if found inappropriately dressed”, said the group in its “about the page” column.

Federal police Corporate Communications Head ACP Asmawati Ahmad told FMT the post could be considered a crime, punishable under Section 507 of the Penal Code for criminal intimidation, or Section 233 of the Communications and Multimedia Act for improper use of network facilities or network services.

“So don’t taint a religious event by doing things that can disrupt public harmony and peace,” she advised.

The post was published last week, and at the time of publication, the group had close to 150 members.

A Facebook user by the name of Henry Barnabas, who allegedly created the page, wrote on his personal Facebook page that the post was meant to protect the “ritual and culture” of Hindus.

“Let’s spread the positive message through this group, so they will also get knowledge and respect the meaning of Thaipusam.

“Most youngsters these days don’t know our history. Thaipusam for them is just to be glamorous, dancing, etc. Let’s bring some awareness among the youth and the upcoming generation,” he said.

Barnabas also called for his followers to make the post viral, saying that women today were behaving like “call girls”.

“Who to blame? Boys trying to protect girls but girls behaving like call girls and at the end of the day, when they are in trouble they will blame the guys.”

Efforts by FMT to contact Barnabas have been unsuccessful.