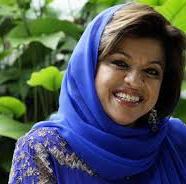 Shahrizat goes with the flow

WANITA Umno chief Datuk Seri Shah­rizat Jalil is now a grandmo­ther of two with one more on the way. 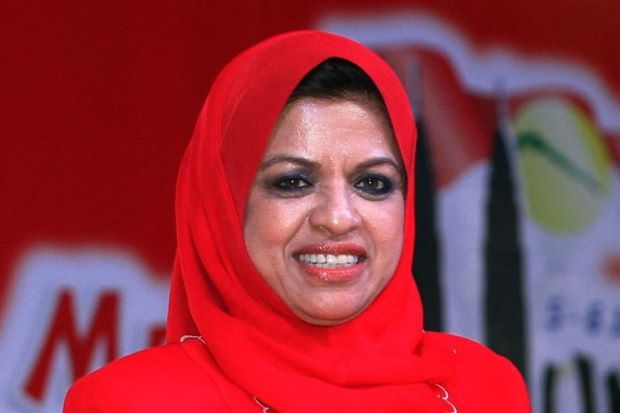 The grandchildren feature quite prominently in her Instagram along­­side pictures of her activities as the Wanita chief and her role as the women’s affairs adviser in the Prime Minister’s Department.

But this grandmother has not lost her va va voom – the glamorous hourglass figure is still there, she is always stylishly put together and her standing in the women’s wing remains unrivalled.

The men in Umno know better than to underestimate her because there is a shrewd and strategic politician behind the sultry and feminine demeanour.

Her family life and her career were shaken to the core over the NFC or National Feedlot Corporation issue but the storm has passed and she tells people she is grateful to God for where she is now.

Her married son Izran and her only daughter, the beautiful and wil­­lowy Izzana, are doing their mas­­ters at the John F. Kennedy School of Government in Harvard University.

Izmir, the eldest son who bore the heat of the NFC scandal, is also married and running his own business. She calls him her Rock of Gibraltar.

But Shahrizat knows very well that her Wanita Umno wing is the real rock or backbone of Umno.

“I want my ladies to help deliver the best result for Barisan Nasional in the general election. My mum likes to say that if you are determined, you can turn ash into metal,” she said in an interview with The Star.

The wing has helped to crack the glass ceiling for women like appointing more women as Syariah judges and also pushing for women to fill at least 30% of decision-making positions in the Government.

Another priority of the wing this year remains the quest to coordinate problems that Muslim women face when it comes to issues like alimony, child custody and inheri­tance.

This is a big problem because religion is a state matter and said Shahrizat: “If the order is made in the Federal Territory, how do you enforce it in another state? There are so many intricacies, we want greater justice for Muslim women as propounded under Syariah law.”

She said the senior ladies put a lot of weightage on their roles as mo­thers.

As such, livelihood issues and a stable political environment is important to them so that their children can have education and jobs.

They feel strongly that Umno must stand up for the rights of Malays and the mainstay of Wanita Umno is still extremely conservative.

The senior ladies also want to underscore that they are 101% behind Datuk Seri Najib Tun Razak although the wing was largely on the sidelines throughout the 1MDB issue.

The issue was rather too complicated for most of the women who could not figure out what it was all about.

“Wanita Umno is not in the business of shifting the ground, we are always loyal to the leadership. But please remember we were the first to come out to support the president.

“I served under three prime mi­nisters and all three had to face challenges. I know how it is, I went through the same kind of fitnah. People throw allegations and run, they are not interested in listening to explanations,” she said.

The senior ladies are also in one mind regarding the way Tun Dr Mahathir Mohamad has been hammering at their president and party.

“My ladies are really disappointed with Tun Mahathir. Every Umno division that I have been to, my ladies are sad, angry and crushed at what he is doing to us. You should hear what they say, sometimes I have to shut my ears because they are furious he is working with the opposition to bring down Umno,” she said.

Dr Mahathir was almost a cult figure to Wanita Umno members when he was prime minister. They admired him, some of them even had a crush on him and they thought he was the greatest thing to have happened to Umno.

“He was like our father telling us the dos and don’ts of Umno politics. Now, he has gone against everything he asked us to subscribe to. It is very painful for us, especially those of us who served under him,” she said.

“I couldn’t believe my eyes. I came into politics under Tun Mahathir. I had the greatest respect for him but all I feel now is great sadness. For my ladies, the door to their heart was closed the day he held hands with DAP,” she said.

A few days earlier, she uploaded a picture of herself on Instagram seated at the dining table of her house, looking pensive and wearing reading glasses as she pored over the draft of the policy speech that she will deliver on Wednesday.

She had captioned the picture: “May Allah give me the inspiration in preparing the speech for the Umno general assembly.”

Hopefully, Shahrizat will get to finish reading her prepared speech this time because the senior ladies are often uninterested in listening to a serious policy speech.

For several years now, Shahrizat has had to go with the mood in the hall and deliver an impromptu political speech that gets the women all worked up, jumping to their feet, cheering and clapping.

Given that she is planning to inject an election mood among her ladies, she may once again have to go with the flow.

← Couple get jail for roughing up MBSA personnel At least one dead, nine injured in under-construction pedestrian bridge collapse near Mid Valley mall →