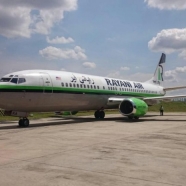 Rayani Air owner and CEO Ravi Alegandrran is optimistic that his suspended airline will resume flights soon, claiming he has secured a new investor to help resolve its financial woes.

The airline, launched last December to much fanfare with its Shariah-compliant credentials, will reapply for its air service licence (ASL) and air operator certificate (AOC) as early as next month, he told Malay Mail Online when contacted today.

Ravi added he had resolved the problem of securing a financial backer and expects to be able to submit its application as soon as the negotiation process is completed by September.

“We already secure, mid of nego,” he said in a WhatsApp text message.

Ravi said the completion of the negotiation “will resolve all issues”, including the unpaid refunds to customers who had bought tickets prior to the revocation of its licences.

On August 8, Aziz was reported to have suggested that the airline submit a new application to the Department of Civil Aviation (DCA) and the Malaysian Aviation Commission (Mavcom) if it wanted to resume operations.

On June 13, the DCA and the Mavcom announced the revocation of Rayani Air’s AOC and ASL respectively, following an inquiry into the troubled airline’s commercial standing and safety aspects.

The DCA said the decision to revoke the AOC was made after a “thorough” deliberation on Rayani Air’s response towards the inquiry, noting that the local airline had been given an opportunity to make a representation during the May 12 inquiry.

Mavcom said in a separate statement that it revoked Rayani Air’s ASL because it found that Rayani Air had breached the conditions of the licence and lacked the financial and management capacity to continue operating as a commercial airline.

Before the revocation, the DCA had initially suspended Rayani’s AOC in April for its unauthorised halting of operations when its pilots carried out a strike over unpaid salaries.

Last month, a group of 40 customers claimed that the cheques they received from Rayani Air as refunds had bounced.

The group reportedly represents some 200 others, and their claims from the airline involve some RM150,000.

Ravi had then admitted that Rayani was unable to afford the refunds after investors pulled out when the airline had its licences revoked.