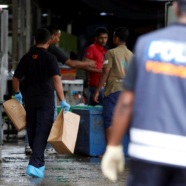 The Penang Hospital mortuary was enveloped in sorrow this morning, as family members of four people who were brutally gunned down at a Batu Maung factory this morning converged to gather more news on their loved ones.

Around 15 family members were spotted at the mortuary.

One of the relatives is believed to be the wife of one of the victims, Chung Wah Tong. Chung, in his 30s, was killed together with their son, a two-year-old boy known only as Ah Bee.

It is understood that the couple also have another child, a one-year-old daughter. The woman was seen weeping at the hospital and being consoled by other family members.

It is learnt that Chung, a professional horse-racing jockey, was back in Penang to assist his mother, Tan Saw Sim, 55, with her business for the Hari Raya period.

Tan was also slain, together with her boyfriend Toh Hock Choon, 50, in the incident.

Toh is believed to be the owner of the chicken factory.

The four were believed to have been gunned down while they were sleeping in the factory’s living quarters early this morning.

The killer is believed to be a family member.

He is believed to have fled the scene in a pickup truck belonging to Toh.

The car was later found abandoned in Bukit Mertajam.

Police have launched a manhunt for the suspect.