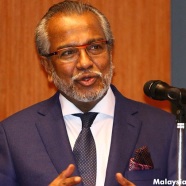 The Federal Court has cleared Umno lawyer Tan Sri Muhammad Shafee Abdullah of breaching the publicity rules under the Legal Profession Act following an interview with a daily in 2009.

A five-man bench led by Tan Sri Raus Sharif said they unanimously agree with the decision of the Court of Appeal last year which set aside a High Court ruling.

“There is no violation if the interview is read in the context of the publicity rules. The Bar Council’s appeal is dismissed,” Raus said.

The court awarded RM50,000 in cost to Shafee, although the senior lawyer asked for RM300,000 as “the council has to be taught a lesson in light of selective prosecution” against him.

Shafee represented himself in the appeal while counsel Arthur Wang appeared for the council.

In July last year, a three man bench chaired by Datuk Tengku Maimon Tuan Mat, allowed the lawyer’s appeal and also ordered that the RM5,000 fine imposed by the Advocates and Solicitors Disciplinary Board be returned.

Maimon said that the statement made by Shafee in the context of the whole interview was not in breach of the rule.

Shafee had been interviewed by The Star newspaper in an article published on September 27, 2009, and the article was said to be “laudatory” of the Umno lawyer.

In 2010, then Bar Council chairman Ragunath Kesavan reported the matter to the advocates and solicitors disciplinary board following the article’s publication.

The board fined Shafee on October 5, 2012 for the misconduct.

On January 10, 2014 High Court judge Datuk Zaleha Yusof said she found it unnecessary to “disturb” the findings of the board which concluded that Shafee was guilty of professional misconduct.

She said what mattered here was the opinion of the board as provided for by Rule 15(1)(b).

“I don’t think the court should interfere with the decision of the board and hence, I dismiss the appeal.”

They had also wanted Shafee to appear before the board for alleged professional misconduct.

However, Shafee obtained an injunction to stop the AGM to discuss the matter.

Subsequently he filed a defamation suit against the Malaysian Bar and three others for attempting to discuss his conduct at the AGM. – March 9, 2016.