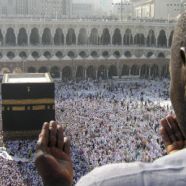 BREAKING NEWS:  At least 220 people taking part in the Hajj pilgrimage have been killed in a stampede near the Islamic holy city of Mecca, officials in Saudi Arabia say.

Another 450 people were injured in the incident at Mina, between Mount Arafat and Mecca’s Grand Mosque.

The stampede occurred as more than a million pilgrims were taking part in the last major rite of the Hajj.

Earlier this month, a crane collapsed at Mecca’s Grand Mosque, killing 109 people and injuring some 400 others.

The Hajj had been largely incident-free for the past nine years as a result of a series of safety improvements made the Saudi authorities.

In 2006, a stampede during the symbolic stoning of the devil at Mina left 364 pilgrims dead.