Notices have been sent to the families of businessman Jho Low and the former top officers of SRC International Sdn Bhd, Nik Faisal Ariff Nik Othman Kamil and Suboh Mohd Yassin, to appear before the Malaysian Anti Corruption Commission to assist in its investigations. 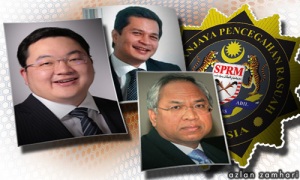 It is understood that the notices were sent earlier this week, after the MACC announcement last Saturday that it was looking for Jho Low, Nik Faisal and Suboh.

“Yes, notices have been given to Jho Low’s family in Penang and also to the others,” a source from the MACC said, speaking on condition of anonymity.

It is not immediately known whether Jho Low, whose full name is Low Taek Jho, has contacted the MACC.

His aide was reported to have said on Sunday that the businessman has not received any notice of MACC wanting to question him and added that he would be contacting the MACC to see how he can assist.

The trio are reportedly being investigated by the MACC in connection with their dealings involving SRC International, a former subsidiary of troubled state investment fund 1MDB. The company is now under the Finance Ministry.

A travel ban has been issued against Nik Faisal (photo), who is SRC International managing director, and Suboh, the executive director of the company, both of whom are said to have gone missing since last month.

Last Saturday, the MACC said the three are required to present themselves before its special operations division, which is in charge of the SRC investigation.

It is understood that following the issuance of the notice, warrants of arrest are likely to be issued if the three fail to turn up.

← Changing times for cabbies Ninety per cent of my shares pledged with banks for loans, says Mahmud →