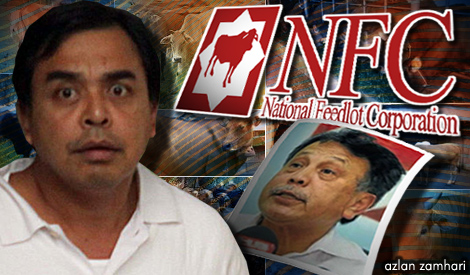 For the next six days, Shamsubahrin Ismail is to desist from further uttering or publishing or causing to be published defamatory statements or similar words and statements and/or passages that are false and/or malicious and/or defamatory of Datuk Dr Salleh.
The interim injunction was granted in the Kuala Lumpur High Court by Judge Datuk Mohd Zaki Abd Wahab. The application would be further heard at length on Monday when lawyers for Datuk Dr Salleh argue the merits.

Datuk Dr Salleh had claimed that he has been seriously injured in his character, credit, reputation and business and had been brought into public scandal, odium, contempt, distress, embarrassment and humiliation.

Shamsubahrin had engaged in a systematic campaign of malicious falsehood, slander and libel of the plaintiff with the sole purpose of injuring the reputation, character, credit and business of Datuk Dr Salleh.

The systematic campaign of malicious falsehood, slander and libel by Shamsubahrin was first made via a social media website Facebook.com on 19 May 2015 which is accessible to the general public at large, where Shamsubahrin had made defamatory remarks saying he had been made a scapegoat at the expense of an eight-year jail term.

Subsequently, there were another seven postings including one which by way of innuendo invariably scandalized the judiciary and government as well as the MACC, the PDRM, the attorney general and the prime minister of Malaysia when Shamsubahrin claimed that Datuk Seri Najib Abdul Razak and the government administration had convicted him over the NFCorp matter.

In his statement of claim, Datuk Dr Salleh has stated that upon Shamsubahrin being convicted and sentenced by the learned sessions court judge for cheating and money laundering offences under Section 420 of the Penal Code and Section 4 (1) of the Anti Money Laundering Act 2001 on 18 May 2015, Shamsubahrin out of anger and spite for the plaintiff engaged in a systematic campaign of malicious falsehood, slander and libel of the plaintiff with the sole purpose of injuring the reputation, character, credit and business of Datuk Dr Salleh.

Lawyers for the plaintiff are applying to disqualify Zarina Ismail as she had been found related to the defendant and therefore in conflict of interest. Zarina is sister to Shamsubahrin Ismail.

Notwithstanding a conviction handed down on Shamsubahrin Ismail for five counts of cheating NFCorp’s chairman and 17 counts of money laundering, and being sentenced to eight years imprisonment and four strokes of the whip, the former consultant had not stopped at his vexatious and malicious rants on NFCorp and its chairman.

Moving on, NFCorp has also initiated legal action to reclaim the RM1.75 million from the convicted consultant for failing to deliver on his purported business consultancy services.