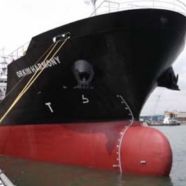 A fuel-laden Malaysian tanker that “disappeared” off the east coast of Johor last Thursday has been detected, repainted and renamed, in Cambodian waters, according to Chief of Navy Admiral Tan Sri Abdul Aziz Jaafar.

The MT Orkim Harmony, carrying 6,000 tonnes of petrol valued at RM21 million, is being tailed from the air by aircraft of the Royal Malaysian Air Force (RMAF), Malaysian Maritime Enforcement Agency (MMEA) and the Royal Australian Air Force (RAAF), he said.

“We have found the vessel and RMAF, MMEA and RAAF aircraft are tailing it from the air,” he told Bernama.

Aziz said the tanker had been repainted and renamed.

The MT Orkim Harmony went missing at 8.57 pm on June 11 as it was ferrying the petrol from Melaka on the west coast of Peninsular Malaysia to Kuantan on the east coast.

The vessel, owned by Magna Meridian Sdn Bhd, had 22 crew on board, 16 of them Malaysians and the rest Indonesian and Myanmar nationals. — Bernama