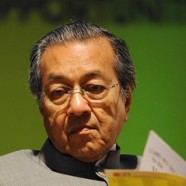 Datuk Seri Najib Tun Razak has accused Tun Dr Mahathir Mohamad of being the cause of the current crisis with his “half-truths”, “misleading jokes” and “twisting statements”.

Writing in his blog najibrazak.com, the Prime Minister said Dr Mahathir would continue to intervene in the country’s administration, even if he were to step down.

“He can say he is simply exercising his democratic rights as a citizen but this is Tun Mahathir. People tend to believe whatever he says, even if it is not entirely accurate.

“The mess is largely of his own making as a result of his attacks and his echoing of the Opposition’s lies and slander,” he said.

The veteran politician, said Najib, knew political statements were not entirely about the truth but what the people would believe, which was “why he continued to make insinuations, speaking half-truths, cracking misleading jokes and twisting statements to make his views exciting and palatable”.

Citing Dr Mahathir’s statement that had changed from 1MDB incurring a RM42bil debt to the sum being “missing”, Najib said people would tend to believe the former prime minister and that was why many on social media began asking about it.

Najib acknowledged that there was a RM42bil debt but denied that the money was missing from 1MDB.

“I urge Umno and Barisan Nasional members along with all Malaysians not to be taken in every time Tun attacks. Take a step back and analyse the facts,” he said.

Some individuals, he said, were dissatisfied that it would take time for the Auditor-General and the Public Accounts Committee to produce findings in their probe against 1MDB.

“If the objective is to really find out the truth about 1MDB rather than trying to oust the current leadership, then the auditors should be given the necessary time to come out with the results.

“I also want answers quickly but if we don’t allow the authorities to provide us with information in a proper and legal manner, how can the Government take action against anyone found guilty? Is the Government supposed to base its actions and prosecutions on wild allegations and tabloid exposes?

“Now that would be silly,” said Najib.

← Nothing2Hide hides PM Can we save our English from going down the drain? →