Communications and Multimedia Minister Ahmad Shabery Cheek has defended the arrest of The Malaysian Insider (TMI) editors, arguing that the journalists were intentionally giving a false alarm. The minister made his point in his Facebook posting. Come to think of it, he has merit. Aren’t Editors gate keepers to accurate reporting? If journalists hold that CEOs are responsible for their companies’ performance, aren’t Editors responsible for their news reporting? MalaysiaKini has this report: 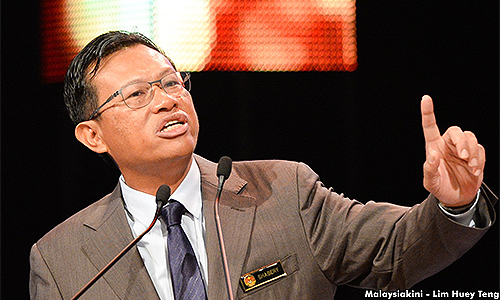 Four TMI senior editors and Ho Kay Tat, publisher of The Edge which owns the news portal, were arrested over a report on the Conference of Rulers which the keeper of the rulers’ seal later said was wrong.

“Someone yells ‘fire’ in a packed cinema. The audience run helter-skelter, stampeding each other.

“It turns out there is no fire. When asked, the person who yelled ‘fire’ says, ‘Just for fun. This is a democratic country, with freedom of speech to say whatever we like.’

“Laughing, the person then walks away,” he wrote on Facebook.

Appended to the posting were pictures of newspaper clippings reporting the arrest of the journalists under the Sedition Act as well as the Communications and Multimedia Act (CMA).

A team of police and officials from the Malaysian Communications and Multimedia Commission (MCMC) raided TMI‘s office in Petaling Jaya on Monday over its news report that the rulers had rejected the move to impose hudud in Kelantan.

After spending a night in the lock-up, they were released when the police failed to obtain a remand from the Magistrate’s Court.

Meanwhile, Ho and TMI chief executive Jahabar Sadiq were arrested on Tuesday when they turned up at the Dang Wangi police station for questioning.

They were released the next day when the police decided not to apply for remand.

On Tuesday, Tourism and Culture Minister Nazri Abdul Aziz said the journalists deserved to be arrested because TMI “lied”.

← Another vile insult to royalty by opposition lawmakers Those who say I’m senile are lying to themselves, says Tun Mahathir →