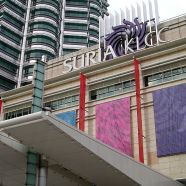 A meeting between the Domestic Trade, Cooperative and Consumerism Ministry and the management of Suria KLCC will be held Tuesday on its decision to relocate the premises of local fashion boutique, BritishIndia.

Its minister, Hasan Malek, said that the meeting is to be held at his office in Putrajaya, which will also be attended by representatives from BritishIndia.

He said the meeting is being held to find a solution over a Suria KLCC directive to shift BritishIndia to another location.

“Let’s sit down and look at the matter together. I only ask for a mutual understanding between them. It is better that we use the win-win principle,” he said after attending a ceremony to hand over a bus sponsorship by Bank Rakyat to the Football Association of Malaysia (FAM) here, today.

Recently, the management of Suria KLCC was reported to have directed BritishIndia to move to another location at the shopping centre.

BritishIndia believed the premises would be rented out to a foreign fashion brand.

“This matter also has something to do with the law and rental agreement. This is what we will look at together tomorrow, ” Hasan said.
During the ceremony, Bank Rakyat handed over a bus for use by FAM, which was part of efforts by financial institutions to support the national sports industry.