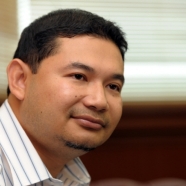 PKR will not seek royal pardon for Anwar, says Rafizi

He said today was the last day to do so to seek application for the pardon from the Yang di-Pertuan Agong, but Anwar did not provide any instructions to proceed.

“No. We are not seeking a royal pardon for his release… and did not receive any instruction from Anwar to do so. He is innocent (after all),” said Rafizi at a Press conference today.

On Feb 10, Anwar was sentenced to five-years’ jail after the Federal Court upheld the appellate court’s sodomy conviction against him.