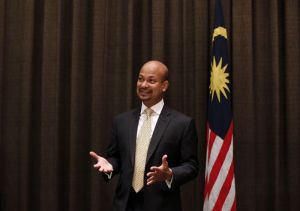 When met outside the Dang Wangi police headquarters, Khairuddin has urged the police to conduct a detailed investigation on the statement made by Arul Kanda.

“If Arul Kanda said there’s an investment worth RM8.3 billion, then I would like to ask why 1MDB has deferred its repayment to Maybank and RHB Capital amounting to RM2 billion three times,” said Khairuddin.

Khairuddin cited Arul Kanda as “irresponsible, suspicious and likely to have deceived the people of Malaysia.”

“If there was RM8.3 billion, why wasn’t the repayment of RM2 billion debt made?,” said Khairuddin when met here, Monday.

“I am seeking a clarification from Tan Sri Zeti who previously said the extension was not given by Bank Negara but was granted by the commercial banks.

“I want to know Bank Negara’s stance on this issue. Why is it not being firm to 1MDB. How can the commercial banks, which is still under the governance of Bank Negara, grant a third deferment,” he added.
–Astro Awani