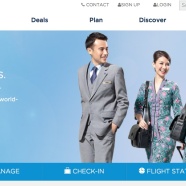 Malaysia Airlines’ website has been hacked by a group calling itself the Cyber Caliphate. The group appears to align itself with with the Islamic State (also known as Islamic State of Iraq and Syria).

Its homepage opened up to a full screen picture from the hackers. It showed a Malaysia Airlines plane and a caricature of a lizard, with the accompanying messages of “404 Plane Not Found” and “Hacked by Cyber Caliphate”. The statement seems to be in reference to the MH370 tragedy last year, and the fact that the plane has not yet been located despite an international search operation.

The browser tab meanwhile said “ISIS will prevail”, while a song called Lizard Squad by Billy The Fridge played in the background.

Calls made to a Malaysia Airlines spokesperson went unanswered.